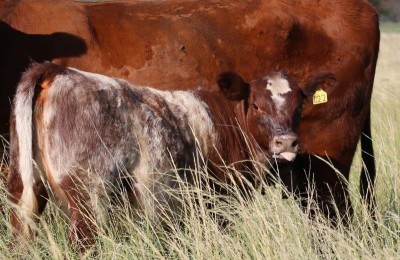 The breeding program at Futurity is focused on breeding cattle for the high quality end of the Australian Beef Meat Industry. They are performance recorded and have the data to back up their physical appearance. They also have the durability to perform in the western conditions in which they are raised. Genetically the cattle have much to offer as they combine light birth weights, rapid growth, and superior carcase quality.

The shorthorn cattle carry an extra degree of muscle over most shorthorn herds and the charolais have good fat cover and intra muscular fat. The type of cattle bred at Futurity are suitable for a wider group of markets and more attractive for those selling their progeny as weaners or feeders. Also by having more flesh and fat cover on the females allows them to stay more productive in hard times.

Coupled with meeting all the basic requirements of sound structure and fertility, an emphasis has been placed on hair type with the main focus of breeding slick coated animals.

There is a strong alliance at Futurity with performance recording and having the data to back up the animals physical appearance. All traits are measured for every animal from Birth weight, weaning and yearling weight. Ultasound scanning of bulls and heifers as yearlings for Eye Muscle Area, Fat and Intramuscular Fat is performed to identify cattle that marble at an early age. The cows are weighed at time of weaning their calf to assess the cows efficiency when compareing cow weight to the % of her weight compared to calf.

Our aim of focusing on moderating Birth weight, increasing Fertility, Finishing Ability and Intramuscular Fat (IMF) addresses some of the needs of Beef Producers for short and long term benefits.